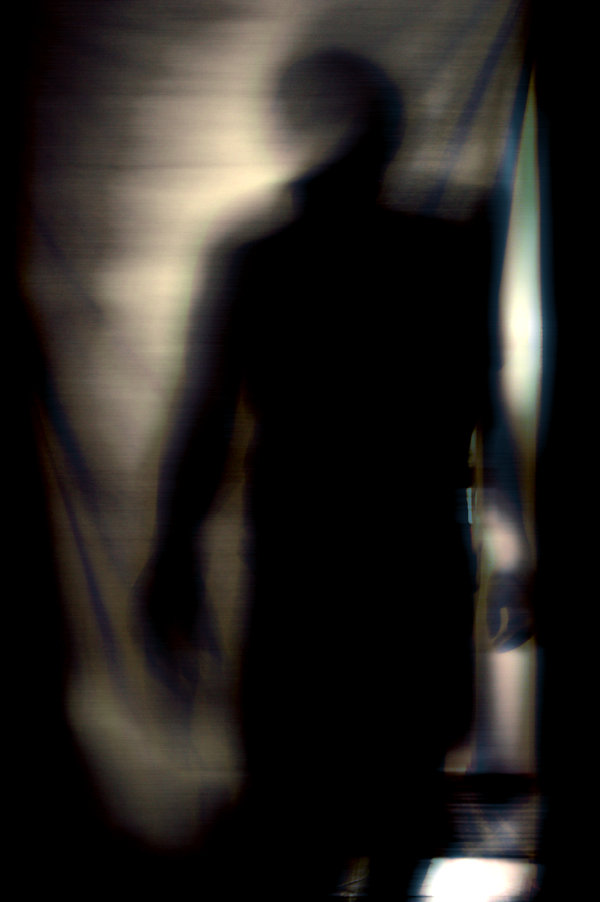 It was 3 am. I had just gone to bed and was on my side facing my sleeping husband on our bed. I was about to close my eyes when the dim light filtering in from the living room dimmed then went out. I though to myself “The light bulb must have gone out in there, but why did the light fade away instead of blinking out?”. Then the blue light coming from my husbands alarm clock dimmed as well. It felt as though the light was being syphoned away.

Now alert I lifted my head just a bit to look around and a huge shadow man walked out of the wall. He was tall about 6 feet or so and large. He was thick, his arms, chest and hands were of normal length but about 1/2 again as wide as a human man’s would be. His outline was visible but barely blurred. I could not see through him, he was black not grey. There was no threatening energy coming from him but no positive energy either. He had the energy of someone with a job to do, graceful, economical in motion and efficient. He seemed to have a sense of purpose and a task to carry out.

He approached the other side of the bed. Used to similar things I simply held very still to see what he would do. He approached the bed until it seemed he would be touching it with his legs. Then I saw his head tilt down as he looked at my sleeping husband. Then he began making expressive arm motions over him. It reminded me of a priest making motions over an ill person but they were larger and more expressive.

It was like he was speaking with his arms and hands. It was very graceful like an odd ballad of some kind. It went on for a minute or 2 then he simply dissipated into nothing. I thought about it for a few minutes then simply went to sleep. The next day I assumed that the light in the living room had burned out, but it had not.

This was my first encounter with a shadow person. Years ago I faced down a nasty entity that appeared in the form of a black smoky fog but never anything like this. I could not see a hat or cloak which are seen in many encounters with shadow people. I just wish I knew what his purpose was. Did he drain the light to cloak himself? to gain more energy? I believe if I see him again I will try to interact with him.

It’s amazing to me how many different forms of life there are around us. Perhaps at some point in the future humans will be able to see and comprehend more than we do now. It’s as though our physical form limits our perceptions. I believe though as we expand our beliefs we expand our ability to see.