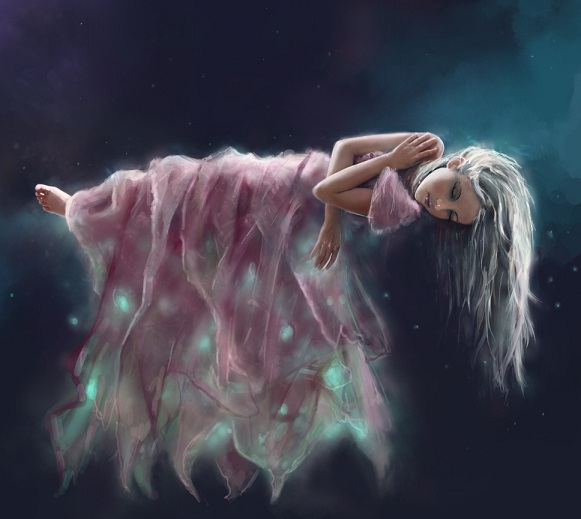 Sleep paralysis and breaking the hold

More and more people are experiencing what is sometimes called sleep paralysis. I have covered this topic within others but with the thinning of the veil I believe it needs it’s own article.
Sleep paralysis happens when the physical body is frozen in place after waking from sleep. Physically it has a purpose, it is the function of our body that keeps us still while we dream. Otherwise we would be acting out our dreams in a physical way during each REM sleep period and injuring ourselves in the process.

SP occurs when we have left the dream state and are lucid and awake but unable to move. Why this happens can be as simple as a natural function of the body not releasing us quickly enough or it can be as complicated as an attack from another realm.

Many times during SP we will feel, hear, smell, taste or see things that we would not experience during normal waking moments. Violence, sexual assaults and mythical creatures or aliens appearing are common. Are these experiences “real”? Yes many are. the physical evidence many times backs up the experiencer’s story. Most reports of these occurrences are reported as frightening or disturbing. Are they all this way? There is no way to know. It may well be that pleasant experiences happen during this period as well but either they do not leave enough of an impression for people to notice them, they are considered part of a dream or people see no reason to report or discuss them.

Over the years I have heard a of many ways to break a “negative” SP. Calling out to a Deity, praying, using a mantra or bringing the body slowly back under control by moving one body part like a finger are the most common. But none of these seem to work for everyone. The reason they work intermittently is because in some cases the person was summoning righteous anger without realizing it. It was this emotion that would have broken the hold.

My own discovery of the way to break the freeze or hold of SP came instinctively. My first reaction was to assume (right or wrong at that point in time) that something was holding me frozen and I immediately went into righteous anger thinking “How DARE you hold me down!”. My reward for this reaction was instantaneously I could move freely.
In our dreams we experience a large range of emotions however righteous anger seems to be quite rare in the non-lucid dream state. When it does happen in a pure form in our dreams we wake.

Righteous anger only comes from lucidity. When we summon it our body immediately realized we are no longer sleeping or dreaming and we are released from our own protective mechanism. Instantly.

From my own experiences with the reptilians and different types of what are commonly called greys I have come to the conclusion that when they need to control us they have learned to use SP and our own body’s defense mechanism to do so.

Being held frozen is a common theme reported by abductees and contactees. Fear usually accompanies this “freeze” however fear will NOT tell our body we are no longer asleep. If this was so nightmares would never happen we would wake as they began. When used by non-human entities SP is quite effective in holding us still for whatever purpose they intend.

Summoning RIGHTEOUS anger however will break this hold every time. To break the freeze instantly fear must be banished and you must have the feeling and emotion that says; “You have no right to hold me, I am a free and sentient Being”. The “How dare you!” attitude serves us well in this situation.

It does not matter if the SP is an attack, a natural physical occurrence or something in between, pure righteous anger will break it. If it does not then there is still too much fear in the emotion.

So the next time you wake and cannot move assume you are being held and simply get indignant about it. The break will be fast and simple and control will be returned instantly. In the case where you are being held by an ET or ID be prepared for a shocked reaction when you simply begin to move.

For those who have suffered through the “Hold” once or many times there is a great power in knowing it will never happen again. So practice summoning righteous anger, be ready to summon it and use it as a weapon, an effective weapon. Like I say at the end of many of my articles. It’s time to take our power back!